Home » A change agent who lives by example 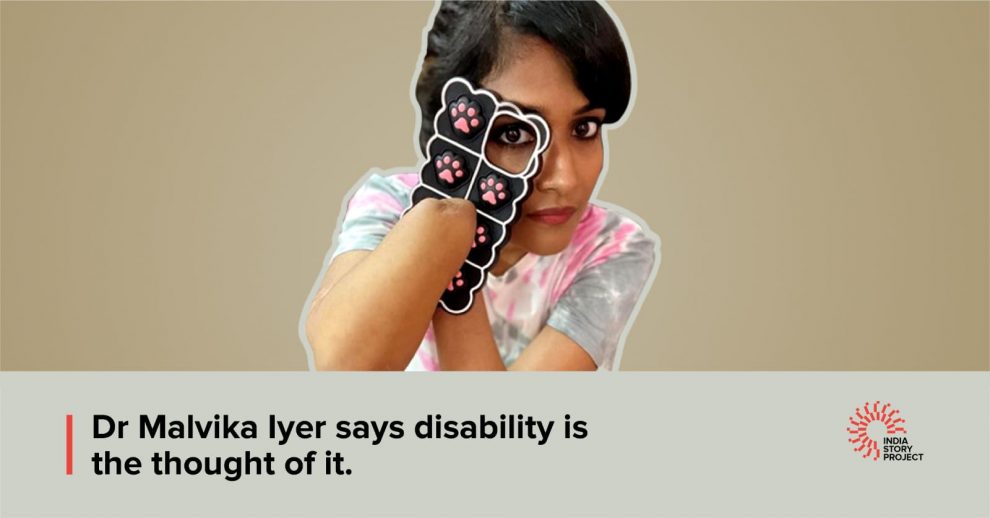 Looking beyond limitations is a rare but a beautiful phenomenon. When you do, you groom yourself as someone like Malvika Iyer. A girl who has shown grit and determination to become a global icon of courage and success after surviving a gruesome blast at the age of 13. She lost both her arms in the accident but today she is inspiring millions of people to overcome their limitations and take on challenges of life with complete hope and complete dedication.

Malvika advocates for an inclusive society. Leaving behind her horrific experience of a diffused grenade accident in Bikaner, Rajasthan, where her father was posted, she has now become an icon who speaks up for disability rights. She is a model for accessible fashion. Her doctoral study investigated the stigmatisation of people with disabilities.

A resident of Chennai, Malvika Iyer was invited to the headquarters of the United Nations in New York on the occasion of the Youth Forum during the 2017 session of the General Assembly as part of the Commission on the Status of Women.

Following her hospitalisation after the tragic event, Malvika strived hard and appeared as a private candidate in the Secondary School examination in Chennai. She secured a state rank among the private candidates and she was invited by the then President Dr A P J Abdul Kalam to Rashtrapati Bhawan. Her achievement caught up the world’s attention.

Being a bilateral amputee does not restrict her from any of her plans to connect to the world online or offline. She has trained herself to use computers and mobile phones and is a star mentor who takes online sessions for people to get motivated. She did her Doctorate in Social Work from Madras Social Work. She is an alumna of St. Stephen’s College, Delhi and Delhi School of Social Work, where she completed her graduate studies in Economics and Social Work respectively.

Literally, the whole nation stood up to clap for her as she received the Nari Shakti Puraskar, the highest civilian award for exceptional women in India for their outstanding contribution to women’s empowerment.  President of India Ram Nath Kovind decorated her with the award on 8 March 2018 on the occasion of International Women’s Day. In the year 2020, in yet another honour on International Women’s Day, Prime Minister of India Narendra Modi handed over his Twitter account to Malvika in recognition of her work.

She conducts her talks and motivational sessions in schools and colleges and for corporate events and is surely inspiring millions of people to live beyond their limitations.

The richness of simplicity
Conserving a river and its people
Comment