Home » A friend of animals in need 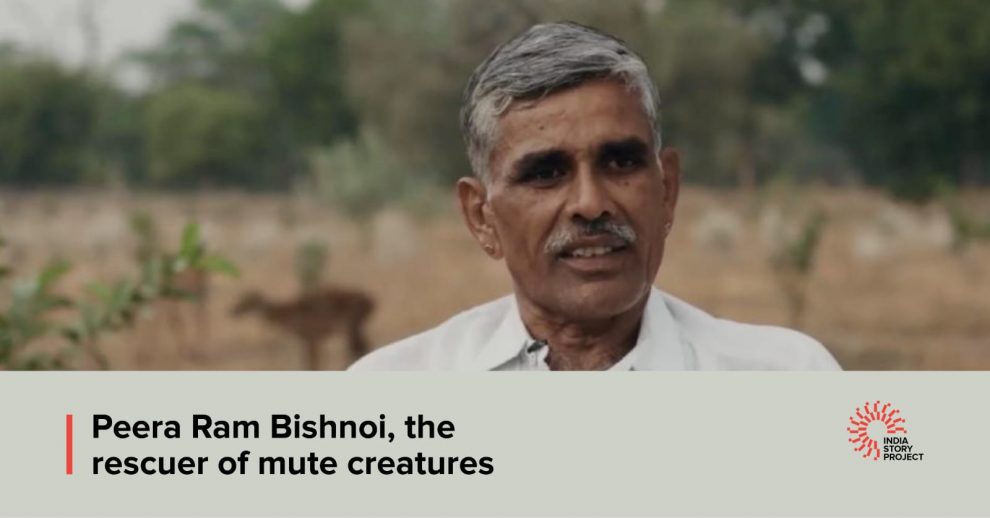 For Peera Ram Bishnoi, a retired paramilitary man running an automobile shop by a highway, an incident changed his life forever. A bike accident involving a Chinakara occurred in front of his shop. Peera Ram and his wife ran to the spot and took care of both the bike rider and the animal. While the biker went off after a while, the Chinkara refused to leave and followed them to their home that evening.

It was a life-changing day for  Peera Ram Bishnoi, the mechanic on National Highway no. 15, and his family of two sons and a daughter-in-law. The family resolved to give shelter to injured animals. The nearest veterinary hospital from their village in Jalore district was around 100 Km away, Peera Ram and their family set up an animal shelter. The mechanic now turned to becoming an animal rescuer.

There were several animals that were killed on the road those days in early 2010. The numbers have only increased with time as traffic and the number of roads has increased. But, what bothered the Bishnoi family the most were the animals who do not die in the accident but are left injured. The family along with their fellow villagers of gram Deora and Bhamana were now equipped to relieve the animals of their pain and treat them to heal faster.

To begin with, they erected a small enclosure to tend to injured animals with home remedies. Peera Ram, assisted by his wife Parvati Devi and his sons Sunil and Kamlesh and daughter-in-law Santhoshi now successfully runs an animal care centre. Villagers volunteer with them in their effort. Antelopes, deer, birds like peacocks, owls and even demoiselle crane and pelican are now taken care of in this unique shelter home.  These creatures are nurtured with loving care until they recover and then left in their natural habitat.

While Peera Ram gained popularity in the surrounding villages for his devoted care of wildlife, he was also questioned for his treatment of animals without a formal education in medicine. On recommendations of the District Forest Officer, Jodhpur zoo authorities recruited Peera Ram to learn treatment methods to make him a skilful animal healer. His formal training helped him gain more knowledge and confidence. Peera Ram is now an expert in the administration of veterinary drug doses and techniques of mini surgeries for animals.

Peera Ram has formed a society called Shri Jambeshwar Jeev Raksha Pradesh Sansthan in Rajasthan to encourage people to donate to the cause of animal care. Apart from rescuing wild creatures, he is also known for nurturing thousands of trees that are essential for the ecological balance of the desert terrain. He plans to create a large wildlife sanctuary where wildlife can thrive in harmony with nature without any conflict with man and traffic.

The birdman of Chennai
Working towards equality for all
Comment