Home » An ethical hacker dedicated to your safety

His mission is to create safe cyberspace for Indians. He believes that only a technically aware user can only ensure the safety of the personal digital space. Rizwan Shaikh is a prominent information security researcher and cybercrime expert who is a popular Indian radio and television voice talking about tips and keys a cyber fraud.

At a time when many of us have at least been approached by a scamster online, Rizwan is one among the several cyber warriors in India who are involved in protecting us against it. A security advisor for various reputed organizations, banks and e-commerce companies, helping them in designing the safe cyber architecture for their web servers and networks. Rizwan’s major accomplishments include identifying the websites which were involved in fraudulent activities and neutralising them. He has caught over 419 scams in India and saved many of their precious savings.

He is on the watch for critical vulnerabilities, bugs and loopholes on websites and networks of major institutions and government portals. He has resolved many cybercrime cases and has set up an Indian feedback loop with different anti-malware organizations to proactively share and report details about the abusive domain names and different malware. His efforts are lauded by the members of various underground hacking groups, security researchers and communities worldwide.

A celebrity guest for corporate and institutional training,  Rizwan’s rise to fame began at the age of seventeen when he detected a loophole in a reputed SMS gateway which allowed spoofing numbers to send messages. A year after, he was all over the media when he protected many Indian websites from getting defaced by Pakistan based Cyber Army. He hacked into the attackers’ network with a pseudo-identity and foiled the plan.

He is a sought after name today for ethical hacking training for government and non-governmental organisations. He has to his credit training more than 30000 professionals.  His expertise includes vulnerability assessment, information security audits, penetration testing, source code reviews, computer forensics, ethical hacking and cyber law.

He now focuses on creating awareness of digital security among the young population. He works as a volunteer to talk to dedicated groups to keep them updated on the nuisances of the hacking world. The most influential tool he has found in this mission is the radio.

“We can’t imagine a world without digital use now. The world of hacking is so dynamic that we need to be a step ahead of the intruder to avert any mishap. It’s all about being alert and smart. I try to create that awareness among the users in India to be aware of the frauds and not to walk into a trap,” says Rizwan talking to ISP.

Rizwan strongly advocates for cyber security to be part of our school curriculum, especially with most of the education moving to the digital space after the pandemic. 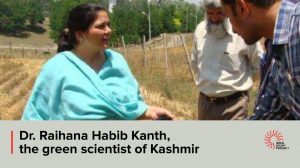 Reviving paddy farming in the valley