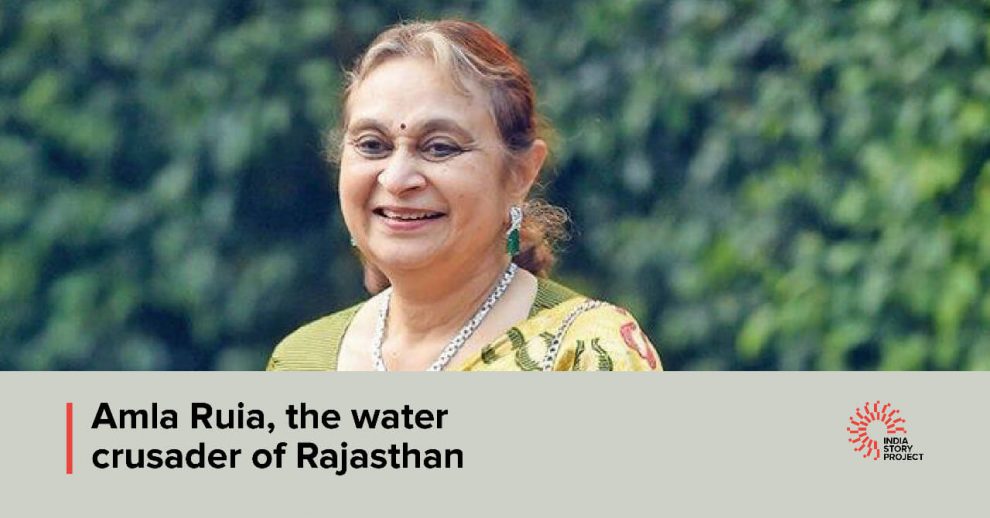 She was the force behind building more than 200 dams in 100 villages of Rajasthan and creating National news many years ago. Amla Ruia and her organisation Aakar Charitable Trust, which she founded, are using the traditional knowledge to inspire and involve communities to conserve water in their villages. By 2022, the number of total check dams constructed under the guidance of the Trust has risen to 600 contributing substantially to the saving of the local ecosystem and direct benefits to people in 378 villages.

76-year-old Amla and her Trust revived the traditional knowledge of building check dams called Khadin in the villages of drought-hit Rajasthan and helped millions of people escape the harsh days of drought and problems with drinking water. The villages now have their own open wells, bore wells and hand pumps, all because the groundwater level of these places have increased substantially due to natural recharge from the check dams.

She is popularly called the Water Mother, a lady who set apart her life for the people and redeemed the drought-ridden villages from their thirst. She started her work in the town of Mandawar in Rajasthan. Her work involved the deep involvement of the villagers in every stage of the execution of the project from planning to execution. She agrees that the success of her projects is due to the immense ownership the locals assign to the endeavours and the expert team from her Trust. To engage the active participation of the locals, 25% of the total cost of the project is contributed by the villagers.

After their extensive work in Rajasthan, her Trust is also active in the other States of Maharashtra, Madhya Pradesh and Chattisgarh. Her area of work though initially focused on water harvesting, now the Aakar Charitable Trust is actively engaged in the livelihood and empowering of the villagers.

Amla believes that the two foremost issues in our country are water and education, hence, the Trust has taken up both these sectors seriously. It has set up highly replicable model schools from pre-primary to higher secondary in Ramgarh, Rajasthan imparting the finest education at minimum cost.