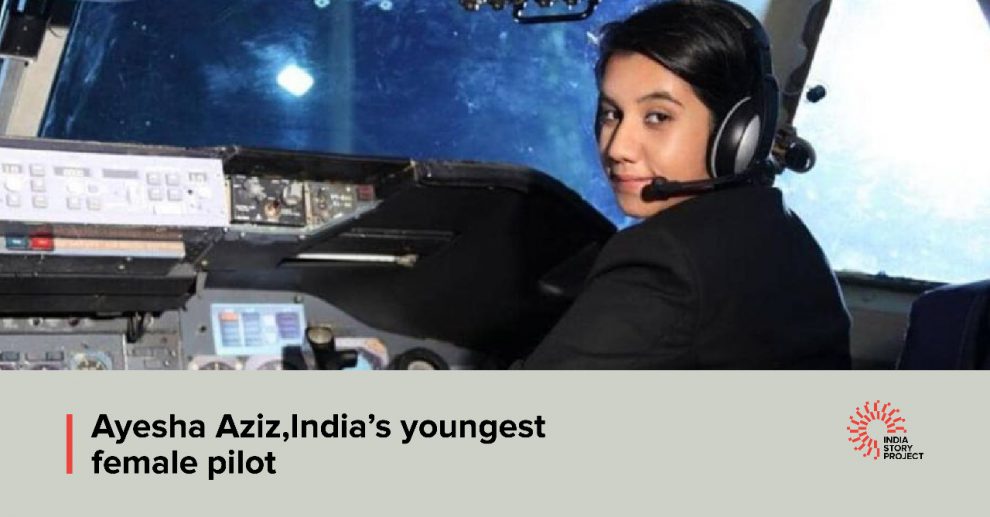 She got her Student Pilot License when she was just 15 year old. She underwent training to fly a MiG-29 jet at Russia’s Sokol airbase the following year. Today, Ayesha Aziz, the 25 -year-old from Kashmir, is the youngest female pilot in the country.

Her cherished dream came true when she met her inspiration, Sunita Williams, during her two months NASA course in the US. To make her resolve more precise she also met the first lady pilot who flew a plane with a private flying licence.

Ayesha Aziz today is the face of Kashmiri women revolutionising the livelihood approaches without any inhibition to venture into unventured domains. Following the news of Ayesha becoming the youngest female pilot in India,  another Kashmiri female pilot became the first one to join the Indian Air Force. These names are now a source of inspiration and a beacon of empowerment for numerous Kashmiri women.

Ayesha graduated in aviation from the Bombay Flying Club (BFC) and obtained a commercial licence in 2017. She thinks Kashmiri women are doing very well, especially in education. “Every other woman in Kashmir is doing her Masters or her doctorate. People of the Valley are doing great,” she said news agency ANI recently.

“I chose this field because I have loved travelling since a very young age and was very fascinated by flying. One gets to meet so many people. This is why I wanted to be a pilot. It is quite challenging because this is not like a normal 9-5 desk job. There is no fixed pattern and I have to constantly be ready to face new places, different types of weather and meet new people,” she added.

Ayesha gives credit for her achievement to the innumerable people who supported her journey and stood by her in difficult times of struggle. She says she was lucky that she has parents who have supported her in everything.

“Without them, I would not have been able to get to where I am today. I am constantly looking for growth, on a professional and personal level. My father is my greatest role model,” she says.

Ayesha says that to be a pilot one’s mental state should be very strong because one is carrying 200 passengers and it is a great responsibility. She was awarded the First Ladies’ Award by the President of India in 2018 and figured among the country’s top 100 women achievers.