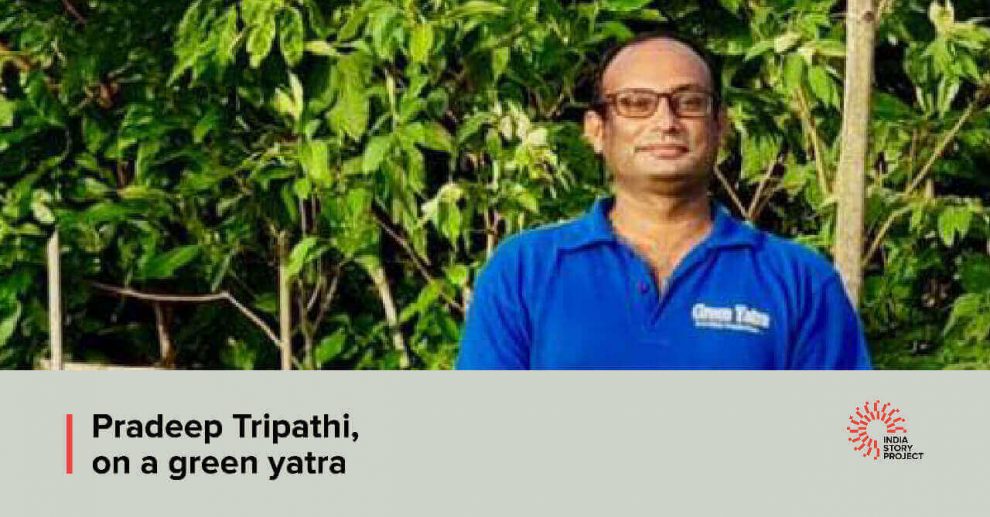 Pradeep Tripathi, the founder of GreenYatra has a very ambitious plan to fulfil by 2025. He and his team are slated to plant 10 crore trees in India and make up for the loss in the green carpet in the region. What Pradeep and his venture is doing is indeed very innovative. They are planting man-made forests.

This Mumbai based venture GreenYatra founded by Pradeep Tripathi in 2009 is a business model which is making up for the green cover in our cities. The team has already planted 100,000 trees and now are determined to plant 1 million trees to coincide with the Azadi ka Amrit Mahotsav celebration of India. GreenYatra wants to give India a better breathing space in its cities while it celebrates the 75th year of its Independence.

Pradeep’s journey of starting Green Yatra did not begin all of a sudden. Before the idea became an NGO, Pradeep and his team conducted a campaign called Go Green Ganesha.

It was a movement to create awareness against the harmful use of Plaster of Paris made Ganesha idols. The initiative was intended  to save marine lives and the environment by convincing people to use eco-friendly idols as an alternative to the harmful ones. The group organised awareness campaigns and other solution-oriented activities in offices, schools, colleges, malls and housing societies and the campaign was hugely successful.

The Go Green Ganesha campaign was followed by the Go Green Kids initiative.  It focused on sensitising and educating school children toward environmental protection and improvement. Children were taught to teach and inspire their parents, teachers, elders and their friends by adopting the 3R ( Reduce, Reuse, Recycle ) lifestyle.

Today Pradeep is known across India as one of the few experts in an innovative plantation method called the Miyawaki Plantation. GreenYatra has created Mumbai’s first urban dense forest at Central Railside Warehouse Company in Jogeshwari East. Pradeep says that the Miyawaki method grows 10 times faster, they are 100 times more biodiverse, and 30 times better for noise and dust reduction. They have 30 times more green surface area and are 100 percent organic, up to 30 times better carbon-dioxide absorption as compared to other plantations.

Pradeep and his team are today pioneering many projects like Pedh Lagao, Project Jal, Sustainable Village, Zaroorat, Bag for Cause and many more such initiatives.The GreenYatra team has already executed their projects successfully in cities like Bengaluru, Delhi, Pune, Ahmedabad and Chennai.

Saving land from pesticides
No obstacle is big enough
Comment