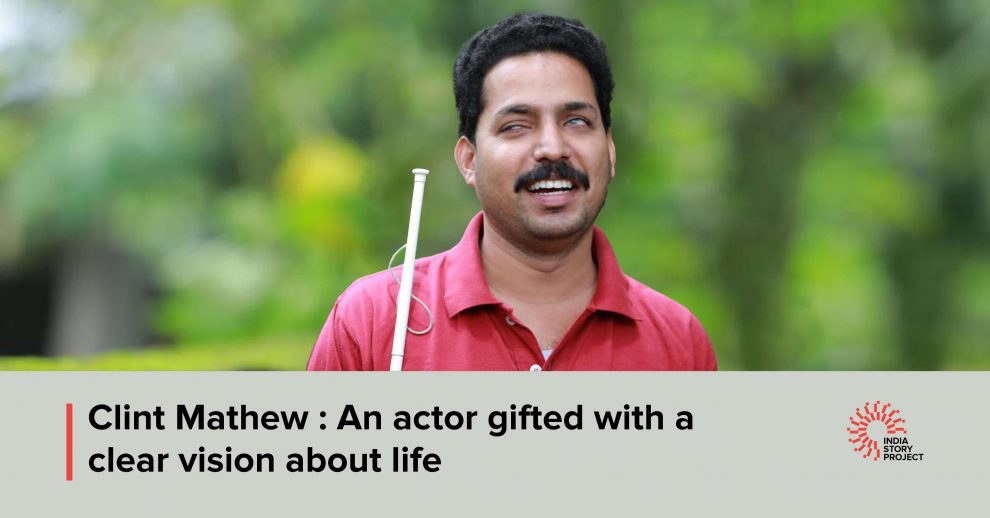 Have you ever been blamed for having an ‘impractical’ career ambition? Don’t worry, you are not alone. Clint Mathew, a visually impaired teacher from Kerala aspired to be an actor. Many suggested him to not waste time searching for film opportunities and rather focus on other ‘possible’ things. He did not relent. He finally bagged a film in which he played the role of a visually impaired character. Offers came one after the other, today Clint is not just an actor but a dubbing artist and a writer too.

He teaches literature in Helen Keller school for the visually impaired in Palakkad in Kerala. A darling of his students, he often blended acting with his teaching and made his classes lively. He can comfortably voice modulate to make his lessons interesting. His talents were noticed by his fellows and students and they helped him reach the silver screen.

It was while director Siddique Paravoor was scouting for a character for his film ‘Tahira’ that he spotted Clint and his immense talent. The script wanted a blind character.  Till they found Clint and his abilities, the crew were all set to cast any actor to play the blind.

“The film was about a lady called Tahira who was a daily labourer falling in love with a blind person and then living for each other forever like good friends. The director decided after meeting me to cast me in the role of the blind person. Both me and Siddique sir took it as a challenge. The first few days of production was a tough routine. But I must say everyone in the crew was cooperative and it became a golden experience for me and for Indian cinema too,” says Clint.

‘Tahira’ was screened internationally in film festivals and it became a hugely appreciated work. The global cinema took note of it. The Delhi screening of the cinema was housefull. After the success of his first film, Clint had many opportunities in small and big projects. Some he had to even let go because of his teaching assignments.

These days one of his staple engagements is as a voice artist for different projects. People in Malayalam cinema have started acknowledging the voice of Clint. His confidence as an actor without visual capabilities is a point of inspirational talk in different seminars.

“I have my limitations because of my teaching commitments but I want to keep a cinema career to let people see stories through me, the frames that I cannot myself see should be a treat for others,” says