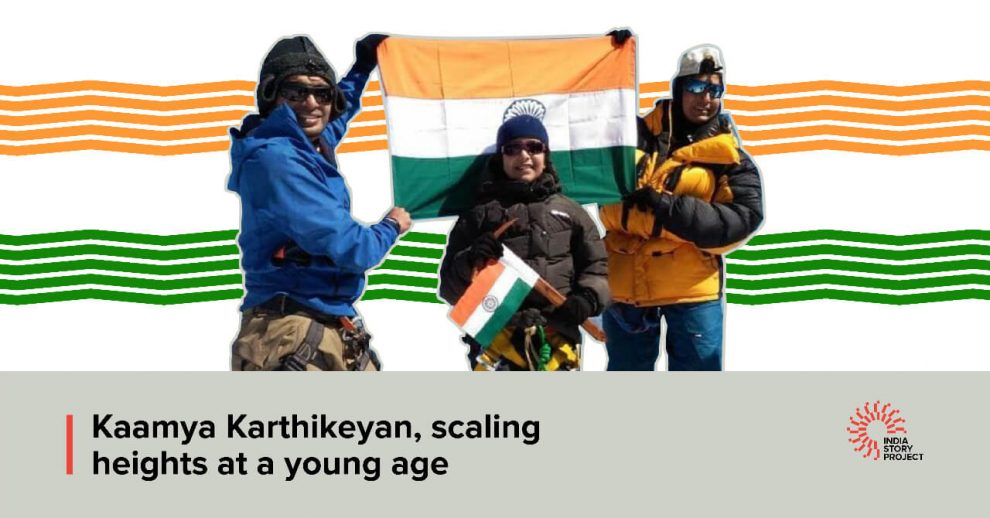 This June, Kaamya Karthikeyan became the youngest Indian to climb Mt. Denali of North America. This accomplishment of hers comes almost three years after she scaled 6260 metre high Mentok Kangri climb in Ladakh in 2019.

She carried the Tricolour and the Naval Ensign to the Alaskan peak on June 27. The 10th standard daughter of Naval Commander S Karthikeyan became global news after she succeeded in her attempt to climb Mt Denali which is 20,310 feet and considered a tough task for mountaineering enthusiasts. It is categorised as the hardest of the global seven summit challenges.

With this ascension, she has achieved the fifth milestone while on her mission to climb the highest peaks on all seven continents and ski to both the poles. She is now left with Mount Everest and Mount Vinson as well as polar ski traverses. If she achieves it, she would probably be the youngest to do so in the world. The feat is termed as the explorer’s Grand Slam. Her initial plans was to finish the seven peaks by 2021 but Covid times disturbed her schedule.

Kaamya started trekking at the age of just three. She started climbing tracks at Lonavala near Pune where her father was posted then. At the age of 9, she started serious mountaineering expeditions with the climb of high peaks in the Himalayas with her parents. At the age of 10, she reached Everest Base Camp in Nepal.

Her father Commander S Karthikeyan is a skydiving instructor and mountaineer from the Indian Navy and her passion for mountaineering was passed on to her as a legacy. Both her parents accompany her to most of the missions. She was taken to trekking and training by the couple ever since she was just two.

At the age of seven, Kaamya climbed Chandrashila, her first high peak climb and with each summit achievement she earned her parent’s confidence to go for more.

Kaamya loves clicking pictures of the views she comes across while tracking and this has earned her huge fan following in the social media too. Another important thing she ensures is to clean up trash which she finds along the way.

Young mountaineer Kamya Karthikeyan bagged PM Rashtriya Bal Puraskar when she was 13. Formerly known as the National Child Award for Exceptional Achievement, is India’s Highest Civilian Honour bestowed upon exceptional achievers under the age of 18.