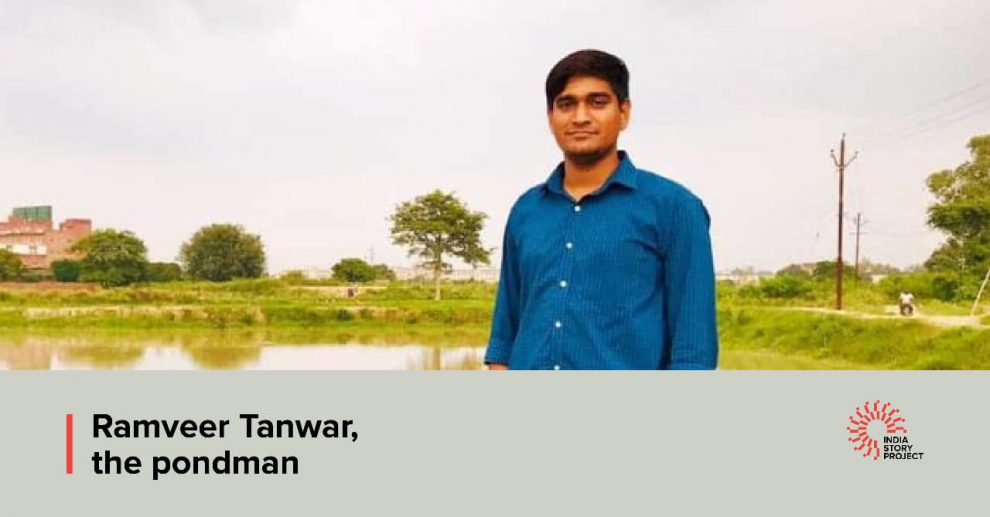 Ramveer Tanwar is better known as Pondman in India. The 26-year-old son of a farmer was born in the Dadha village in Uttar Pradesh and he spent his childhood helping his father in agricultural work. Playing by the lakes and ponds in his village was his favourite hobby but he soon noticed that ponds in villages were getting dried up and there seemed no end to this environmental depletion.

Ramveer shot to national fame when Prime Minister Narendra Modi mentioned him in his ‘Mann Ki Baat’ speech recently. Tanwar had heard of the clean water crisis in nearby cities like Delhi but to know that his villages were suffering from water scarcity made him wake up to do something worthwhile. Though he joined a local university for his technical education after school, his interests remained in environmental concerns and he kept thinking of ways and means to overcome them.

With favourite childhood hangouts getting dried up, he and his friends realised that rather than waiting for the government to act, they must begin the movement. They found out that the dumping of garbage in the ponds was the reason for its drying up. They started by educating the people to change the situation. Tanwar started by giving lessons to kids from his village on the importance of ponds in our ecosystem. The adults in the village initially refused to believe that water sources could ever be dried up, but they also joined Ramveer in his initiative soon.

As people got convinced, Ramveer told his students to come with their parents every Sunday to a special place where he’d facilitate a discussion and suggest methods to conserve water. The message finally started to sink in, and the villagers were really starting to grasp the problem they were facing. His effort was recognized by the district authorities, and these community meetings were officially called “Jal Chaupals.”

In 2015, Ramveer and his team of volunteers, students, and their parents removed all the garbage from the first pond. Not only did they clean it, but they also planted some trees around it. People from other villages and districts started to come to Tanwar to ask for help with the restoration of their local lakes.  Till now, Ramveer and his team have revived around 10 ponds in different parts of the country. On average, the team extracts 500-1000 kg of plastic per hectare of land from each lake. While the plastic is sent for recycling after the revival, the team then ponders on the new ways of garbage disposal methods in the area so that later on water bodies are not harmed.

Ramveer believes that the most important thing in cleaning these bodies of water is to prevent further pollution and hence education of the masses is an integral component of any pond revival by his team. He is an international speaker and he loves speaking to college children on the importance of reviving water bodies.

According to a June 2018 report by government think tank NITI Aayog, India is facing the worst water crisis in its history with some 600 million people suffering severe water shortage.

A thoughtful business model
Striving to save water for future
Comment