Home » Snake man whom Prince Charles came down to meet 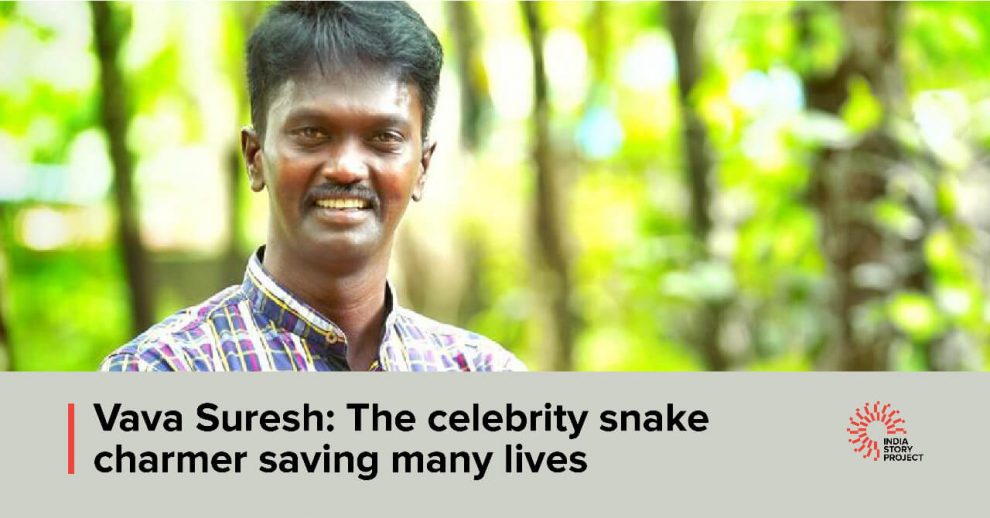 He is a household name in Kerala. A man who has been acclaimed by people, government and even foreign dignitaries including Prince Charles of England. Vava Suresh, a snake expert and a trainer on wildlife conservation is a person who is most sought after for people in need in Kerala. From controlling a snake and taking it captive to finding an antidote for snakebite, Suresh is a one-person institution.

Vava Suresh has to his credit collection and released around 40000 snakes that had strayed into human-inhabited areas in Kerala. It includes more than 250 King Cobras. He has a popular television show in South India called the ‘Snake Master’ in which he gives tips to common people on how to deal with snakes if it is found in their vicinity. He is a trainer for police and paramilitary personnel and his core message in all his training is that the snakes will not harm you unless they feel threatened.

He has survived many venomous snakebites and has been hospitalized several times. The last one in January 2022 was almost fatal and he was admitted to ICU for many days. His release from the hospital received a hero’s welcome from the media and the people of Kerala. In all, Suresh now has survived more than 300 snake bites. His celebrity status is quite evident on the streets of Kerala with specially dedicated buses in his name plying in this southern coastal state.

Suresh is renowned for the conservation activities he rescues and releases endangered species of snakes and also preserves their eggs to breed the species for their further growth.

In 2012, Suresh was offered a wildlife department job by the government of Kerala which he humbly refused claiming that his official position will hinder his public interaction and service to society. The Kerala Government had plans to set up a snake park with Suresh’s expertise.

Suresh’s expertise has helped Kerala police solve many criminal cases, the latest one being of a husband who killed his wife with a cobra bite. He has won several awards and state recognition for his work and Suresh plans to ensure that his skills are passed on to the younger generation. He gives talks and training to children in colleges and schools for this purpose.

In 2013, when Britain’s Prince Charles during his visit to India expressed his desire to meet Vava Suresh and a special meeting between them was arranged in Thrissur Kerala.