Home » The innovative teacher from Kashmir 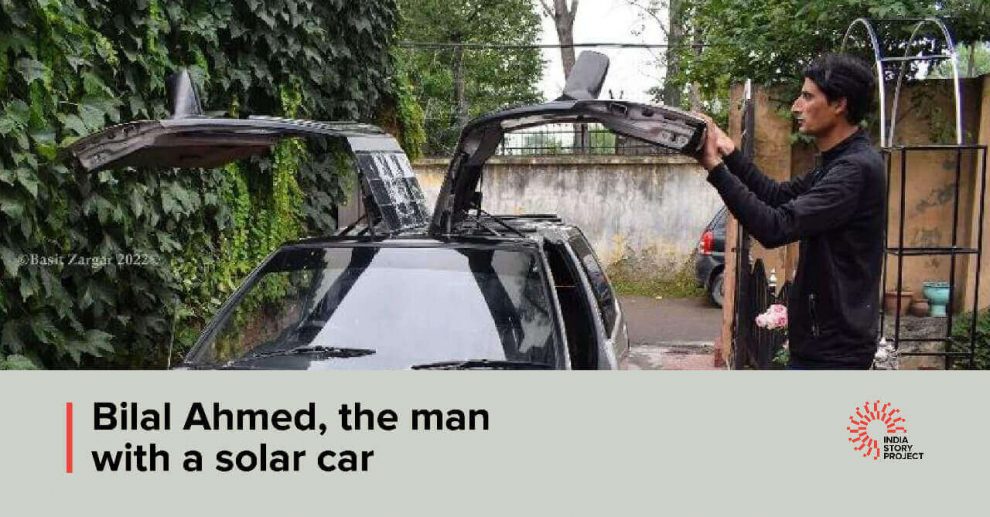 Bilal Ahmed,  a maths teacher from Srinagar, is in the news globally. He has developed a solar car as a result of his research and innovation for the last 11 years. The breakthrough achieved by Ahmed, a civil engineer by education, is an example of grassroots level innovation at a shoestring budget and bare minimum facilities.

After trials and testing for more than a decade the model unveiled and used by Bilal is a car which has solar panels all over its body surface. The solar panels are adjustable as per the sunrays and for effective charging.

Talking to a news agency recently after demonstrating his innovation, Bilal said that he studied various luxurious cars which were made since 1950. He also consulted the works of an engineer and innovator named Delorian who started a company DMC which helped him and motivated him to make a car which was luxurious and simultaneously affordable for the common masses.

“Cars like Mercedes, Ferrari, BMW are just a dream for a common person. Only a few people are able to afford it while it remains a dream for others to drive such cars and roam in them. I thought of something to give a luxurious feel to the people as well,” he told the news agency.

The innovation by Bilal has created not just an energy-friendly and luxurious car, but it is affordable and within the budget of a common man. Living in the Sanat Nagar colony in Srinagar town, Bilal is a celebrity of this valley as he drives his solar car to work every day. Kids and tourists pose with him and his car for selfies and seek advice from him.

Bilal’s original idea was about creating a disable friendly car which he could not materialise due to financial constraints. His plans to innovate a vehicle which is safe and special-people friendly had to be curtailed midway. He was expecting support from the government departments for this innovation but it did not come his way. Later, with rising prices of fuels, he zeroed upon innovating an energy-friendly solution for commuting.

His breakthrough arrived when he visited Chennai and talked to a solar panel-making company about the possibility of making a car body with solar panels. He had to decide on a solar solution which could suit the gloomy and often winter climate of Kashmir. He got the panels that occupied lesser space and gave higher efficiency. He took ideas from international models for working on the designs. To give additional protection to users, he used lead-acid batteries for energy storage in place of lithium batteries available in the market.

Creating value from trash
Standing up for victimised men
Comment