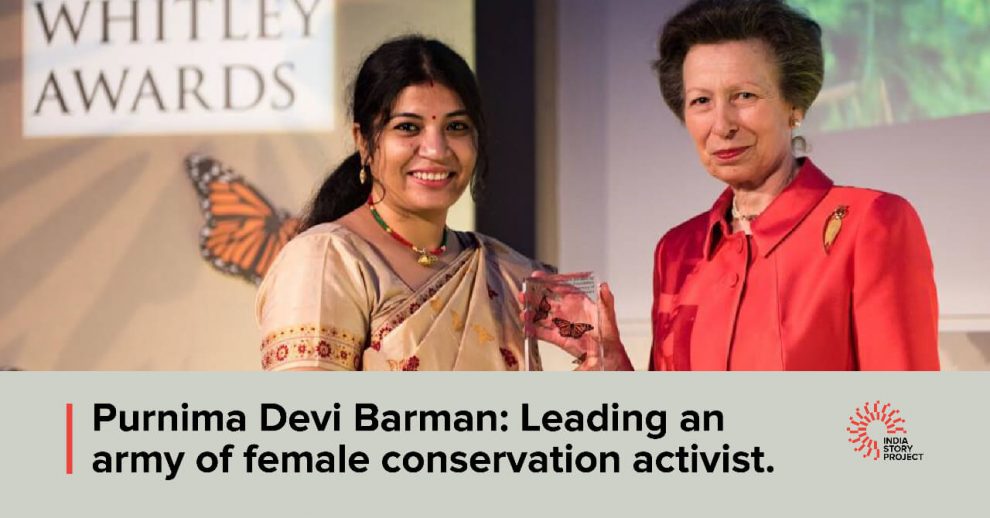 Almost one-and-half metres long Greater Adjutant Stork is a rare bird found only in Assam and Bihar. Other than India, the only place it is available is in Cambodia. Of all the places, the wetlands of Assam are the largest breeding colonies of this breed of Stork.

To save this avian friend under threat, an army of women environmentalists called the Hargila Army led by Purnima Devi Barman is on alert and they are working day in and day out to ensure its safety. Globally, it is estimated that there are only around 1200 of these birds left and Assam is home to around three-fourths of this population. They are now on the International Union for Conservation’s red list of threatened species.

To begin with, the ladies in the Hargila Army tried to sort out the human perceptions about this rare bird. Greater Adjutant Stork is considered a bad omen by people and was considered untouchable (Hargila). Barman, who is a qualified biologist from Kamrup, along with his 500 volunteers has been successful in educating people about the importance of these birds and the importance it holds in the local ecosystem.

“There was a time when people did want these birds in their vicinity. These birds were considered bad news if they arrived nearby. There were instances when people would chop trees down or smoke birds out of their nests by lighting fires. Now things have changed a lot. People in the region consider it their duty to conserve these birds in danger,” told Barman to ISP.

There is an increase in the number of these birds now in this region. The artificial breeding platform of bamboo set up by the community with the guidance of the Hargila Army has proven to be beneficial. We took up a breeding programme with help of all stakeholders including civil society and government. Assam today has more than 270 nests of these birds. We consider the change has happened because women have been involved in the decision-making process, she adds.

Barman has inspired a whole new generation of youngsters to join her in the conservation efforts. She takes regular sessions in schools and colleges to sensitise them about the importance of conserving Greater Adjutant Stork and its natural habitats – the wetlands.

Purnima Devi Barman is the recipient of Nari Shakti from the President of India and the Green Oscar Award for her movement to protect the Greater Adjutant Stork.