Home » Walking along the rivers 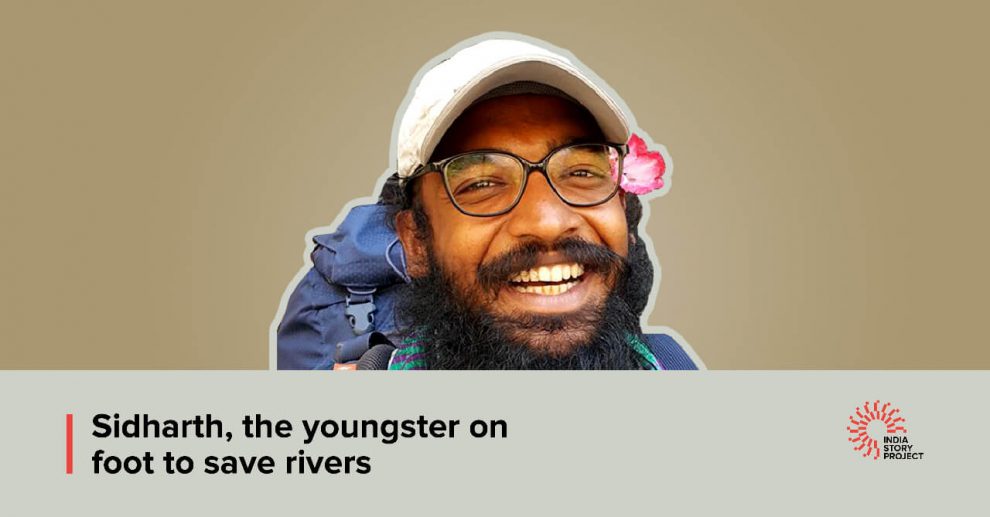 He is on a mission to create public archives on very vital issues concerning our daily lives like water management, rivers and the ecosystem that supports them. He aims to create a situation where the public systems including the government are accountable for the upkeep and preservation of our rivers. Meet Sidharth Agarwal, the man who is walking on foot with his archiving tools across India to document rivers.

Sidharth employs grassroots-level research using modern multimedia tools to collect first-hand evidence about rivers and their health. He is striving to narrate the story of how changes in these ecosystems are impacting us. His vision to create public archives is part of his commitment to telling the story of our environment to a wider audience of decision-makers and common masses.

Born in a business family in Kolkata, Sidharth is an IIT who dared to take up activism. He is an aerospace engineer and considers his college as a place where he was given the freedom to experiment and do things differently.

He founded the Veditum in 2015 to pursue his river activism journey. He is the only full-time employee of this organisation and works along with volunteers and interns. Most of his projects are crowdfunded. The motivation behind Sidharth’s unique idea of documenting rivers is his message that the world is facing a terrific challenge from the increasing climate change situation resulting in the all-around imbalances around us. He also wants to instil the fact in people that for any society rivers play an important role in the lives of its people. From nourishing our religions to farmlands, rivers play many roles and they all are under threat.

‘Moving Upstream’ is the latest project pursued by Veditum. It is an attempt to document the rivers of India, bringing out first-person narratives as well as large-scale data archives on the rivers’ condition and lives of the people of the river basin. He started it with his walk along the river Ganga.  Thereafter, his team members walked along Betwa River, a tributary of the Yamuna, while Siddharth walked along Ken river in Madhya Pradesh.

Two of the other projects still in their different stages are the ‘City Water Walks’ and ‘Walking Back To My Roots.’

Sidharth believes that documentation cannot be perfected with a single walk and foolproof research cannot be completed with a one-person effort. He needs many others to join. He believes that to document a river, the walk will have to be repeated every three years so that changes can be recorded.

While the governments are still to take note or contribute to the documentation efforts, Sidharth is busy walking along rivers setting up conversations with locals and trying to find the stories and facts which need to be told to the next generations.