Home » An Alchemist of natural dyes 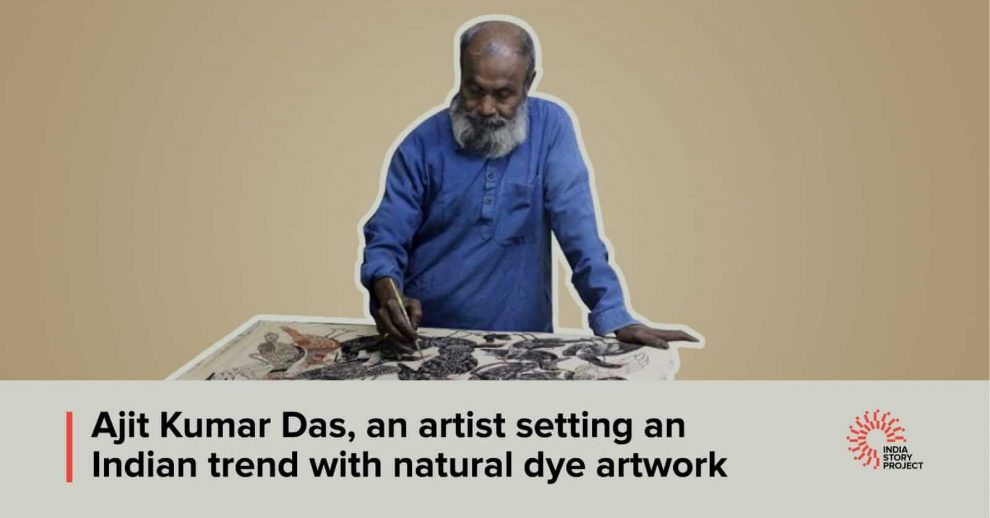 Ajit Kumar Das is known as the master of natural dyes. Apart from his expertise in working with dyes and block printing, he is known globally for his exquisite work using kalam and bamboo reed, he has to his credit exhibitions across India and abroad in prestigious venues like the Victoria and Albert Museum, London.

One can identify the work of Ajit Kumar Das with its expressively intricate botanical drawings, animals, birds and abstract forms with bold use of colour and calligraphy. Das through his dedication and eye for detail has rendered Indian textile art a rare celebratory status in the world arena.

Das is credited with the distinction of enabling Kalamkari to be considered an individual art form, beyond its regional identity. Almost all of his hand-painted work illustrates his closeness to the flora and fauna and the designs are closer to nature. In his rich collection of work spanning four decades, one can connect to the surroundings we live in and appreciate the details which we often miss with our naked eye.  Constantly working on cotton, he suffuses the textiles with colour and complexity.

Born in 1957 into a family of dyers and washer folk in Tripura, Das imbibed the techniques of bleaching and dyeing from an early age. He recalls his father using Annatto to dye the clothes of Vaishnav ascetics, a traditional orange-yellow, and he also reminisces about making his own toys from discarded bamboo sticks and clay. Circumstances grounded him and made him aware of readily available natural resources. Financial constraints meant he never finished school since he had to earn money to help his family make ends meet. His earliest job as a printer, however, taught him skills that eventually led him to a government job.

Das began as an artist at the Weavers Service Centre in Ahmedabad, established by the Government of India in the early decades of independence. It was also from here that he became involved with commissioned work for Vishwakarma, a landmark series of textile exhibitions from the late 1970s to the early 90s.

Upon retirement from the Weavers Service Centre, he developed an independent artistic practice in textiles. Since then, he has exhibited widely, and his works have been acquired by important private and institutional collections in India and abroad. Currently based in Kolkata, he leads workshops on natural dyeing and regularly mentors students and the next generation of artists.