Home » His trek is inspiring masses to donate blood 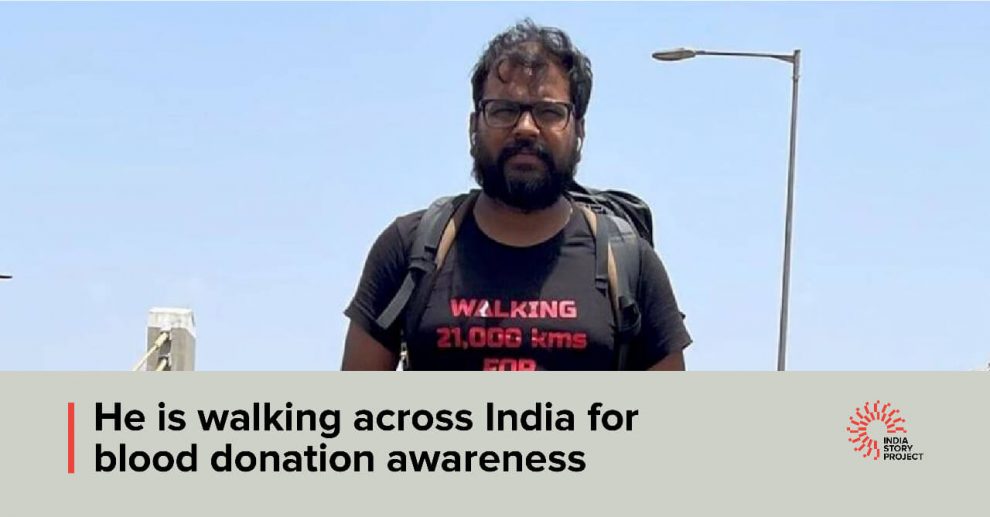 Kiran Verma is a Delhi-based activist whose dream is that nobody in India dies in need of blood. He has been on a 21,000 km walk from Kerala’s capital Thiruvandapuram since last December and has completed more than 4000 km on foot till now. His aim is to complete his 21K target by the 31st of December 2025.

Kiran is the founder of Change With One Foundation, a nonprofit organisation under which two programs. One is called Simply Blood which claims to be the world’s first blood donation platform and one of the largest online blood donor communities. His organisation’s other programme called Change With One Meal serves tasty hygienic and healthy unlimited meals at just Rs.10. It has fed 4.5 lakh people till now and was a tangible help to stranded labourers during the lockdown time.

Kiran’s organisation has played a role in saving around 35000 lives till now by making blood available to needy patients on time. A blood donor himself, Kiran Verma is an influencer on a social media platform and was adjudged Linkedin Power Profile in 2018. His aim to all States and Union Territories of India by foot till the end of 2025 is aimed at ensuring creating awareness towards blood donation among the masses.

Kiran believes that it is all about taking the message to people. He is nurturing relationships with communities to reach out and find allies in his mission. He goes to villages and sits in their local discussion while telling them about the advantages of blood donation.

A typical day for Kiran during his trek expedition starts early in the day and is halted for a while around 9 am before the sun gets hot. He spends his time for breakfast and local interaction before resting for a few hours before doing his second spell of walk during the evening. In all, he covers an average of 40km a day and for rough terrains and steep climbs, he has set a humble target of only 30 km a day.

Unlike the more popular Kanyakumari to Kashmir kind of walks, Kiran has set a route of 21K crisscrossing India to ensure that he touches almost all regions and finds a place to convey his message to all the corners of the country.

He thinks capturing the diversity of India is not possible with a straight north-south journey. He is not just finding friends, but he also inspires organisations, religious bodies, institutions and individuals to hold blood donation camps as he cloaks from one destination to another.