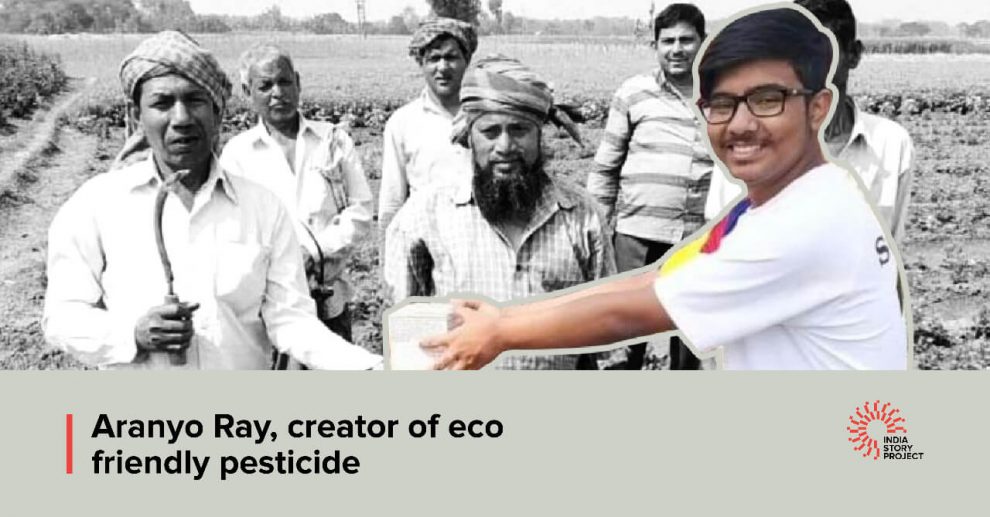 We all are witness to the havoc wreaked by traditional pesticides on farmers and the environment. It is not only poisoning the earth but also is critically affecting the lives of individuals who eat the farm products. Kolkata boy Aranyo Ray thought of a solution to the problem of pesticides and he was successful.

Aranyo invented a bio-pesticide called Nanocide which is completely eco-friendly and has helped many farmers till now. The idea of looking for a biological solution to the pesticide problem triggered him when he was in his native village in Ranaghat. The school going Aranyo was particularly disturbed by the harmful effects of toxic pesticides on farmers and the surrounding environment including the drinking water sources.

The young boy, while he was only 16, developed two scientific, sustainable and affordable organic pesticides branded NanoCide and SoyaSafe. The main component of NanoCide is rice husk ash, an abundant agricultural waste and SoyaSafe is a methyl jasmonic acid (MeJA) extract from phytohormones found in all plant life, especially the jasmine flower which is grown abundantly in his area.

Aranyo was greatly helped by the Central Research Institute of Jute & Allied Fibres (CRIJAF) in West Bengal whose researchers and library access helped him develop his product.

He first tested his bio-pesticides with more than 1000 farmers in his village in Ranaghat. NanoCide and SoyaSafe were readily accepted by the local farmers and the local panchayat and farmers’ cooperatives helped him in his initiative.

Aranyo and his innovative projects have made him a three-time IRIS National Fair finalist. His nanopesticide for jute represented India at the Intel ISEF in the USA, and further won the Pramerica Spirit of Community Service Award, given to the top two projects out of 3,200 plus submissions for voluntary community service. The  cash prize helped him further improve his product and start production and eventually benefit many more farmers.

Eco friendly pesticides developed by Aranyo are no doubt a boon to agriculture as well as the environment. He considers his birth in a farmer’s family as the biggest inspiration to develop the products. His closeness and the first hand experience of seeing the jute farmers helped him understand their problems better. Aranyo has also founded a group called NanoCide, a nonprofit organisation to help marginal farmers defend their crops. About 200 farmers of the organisation were part of the initial field study of the bio-pesticide in 2018 in which they used NanoCide and traditional pesticides simultaneously. His organisation has also developed farmers’ associations in Nadia, Malda and Murshidabad districts in West Bengal to expand and further their work. He also plans to reach out to farmers in Bihar and Assam for wider usage of the bio-pesticide.