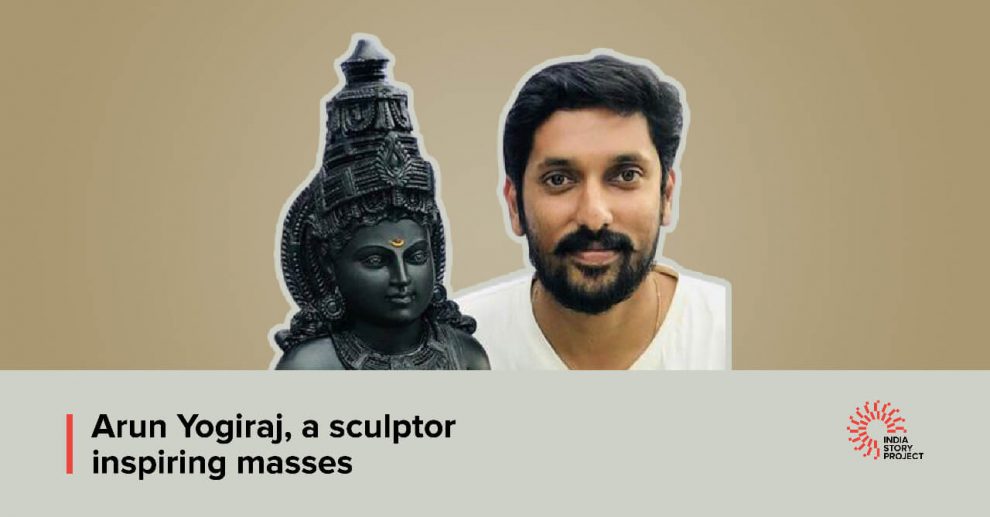 He is an MBA and tried his hand with an HR company before taking up his family tradition of being a sculptor. Meet Arun Yogiraj, the man who is bringing glory to the nation and the art of sculpting by building on the art passed on to him from his father B S Yogiraj Shilpi, a recipient of many awards including the Amarashilpi Jakanachari award instituted by Karnataka Shilpa Academy and the Karnataka Rajyotsava award.

Apart from his father,  Chowdappa Achar, Basavanna Achar, and Basavanna Shilpi were his other four forefathers who were accomplished artists of their time. Arun’s grandfather B. Basavanna Shilpi was a recognized artist in the royal palace of Mysuru. He carved the temples of Gayathri and Bhuvaneshwari on the palace premises. He also sculpted the Cauvery idol at Krishna Raja Sagara dam.

Though Arun first had plans to pursue a career in the corporate world, he listened to his inner voice and left the private sector job and returned to his native place to carry forward the family tradition.

Hailing from Mysuru, Arun was in news recently when Prime Minister Modi unveiled his creation, the statue of Adi Shankaracharya, in Kedarnath, Uttarakhand. Arun worked for nine months on the project and completed it in June this year. He spent a month at Kedarnath to install the statue but had to return a week ahead of the unveiling due to his mother’s ill health.

Arun Yogiraj is now working on another project of a 25-feet tall monolithic statue of Anjaneya or Hanuman which will be installed at Chunchanakatte near Mysuru.

Arun’s artwork dots various parts of India. One of the most appreciated works of the most popular creations of the late cartoonist R K Laxman, the Common Man is commissioned by the Indian Railways. Both cartoonist Laxman and his writer brother R k Narayan were from Mysuru. The sculpture of the Common Man is on display at the Malgudi Museum in Shivamogga.

Arun is determined to take the art form forward and across continents. He was recently contacted by the Czech republic for carving a masterpiece. The world knows that Arun Yogiraj has a bond with art. His work is appreciated and studied globally. United Nations General Secretary Kofi Annan visited Arun Yogiraj’s place of work during his India visit and appreciated his accomplishments on stone.